Interview in the Knysna-Plett Herald

The Knysna-Plett Herald, Knysna’s local newspaper, holds a very special place in my heart. When I was growing up, my brothers and I featured in it every so often; my brothers usually for sport, me usually for piano or cello exam results. My camera-shy mother featured occasionally too, as part of her fundraising efforts for the Knysna Child and Family Welfare Society and later Epilepsy South Africa.

Years later when I was doing my research, the Herald became a valuable source of information about Knysna’s apartheid past. Articles and readers’ letters about the national referendum of 1983, which saw coloured and Indian people gain seats in a new ‘tricameral’ parliament – but black people still denied a voice – gave me amazing insight into Knysna’s reaction to those controversial changes. Another article showing my mother accepting a minibus donated by national newspaper Rapport really brought to life the story she’d told me about how she bugged the Rapport people until she got the much-needed vehicle to transport the townships kids to school. And a front-page feature titled ‘Black Pawns in Shock Move’ documented in vivid detail the appalling conditions in the temporary township of Bongani, which some of Knysna’s black people were moved to when their squatter camp got demolished to make way for a wider highway.

So I’m very proud to be featured in the Knysna-Plett Herald today, interviewed by Anoeschka Von Meck. 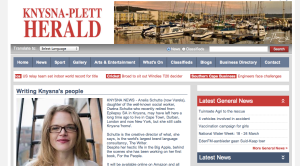