When I went back to South Africa to work on this book, I set out to find the truth. And to do that, I knew I had to hear all sides of the story.

So I spoke to the ANC powers that be, and the apartheid powers that had been. I spoke to a man whose job it had been to catch black people without the necessary paperwork to live in Knysna, and the women who’d lived in fear of their husbands being caught. I spoke to a mother whose child had been shot dead by the police, and a policeman who’d been there on the night.

One man told me he’d been tortured by the police while in custody. Knysna being such a small town, it wasn’t hard to track down the policeman in question. But when I spoke to him, I heard a very different story.

What soon became clear was that the truth is a very subjective concept.

I shared some of the more conflicting stories with a friend.

‘They’re all telling you the truth,’ he said. ‘The truth that they remember.

‘The truth that makes them most right.’

Today I’ve been trawling through hours of video footage of interviews and dozens of photographs that will become the trailer for my book.

The photos brought back many memories from when I was little. Most of them were taken in the 1980s by my mother, who used them for slide shows (using an old-school slide carousel) to help her make a case for funding for better facilities in the squatter camps. And by ‘facilities’ I mean things a simple as a single water tap to serve an entire community, who had no running water, electricity or sewage facilities at the time.

Here are a few of those pictures…

A typical scene from Knysna’s squatter camps in the 1980s. Sadly, there are still some houses that look like these. 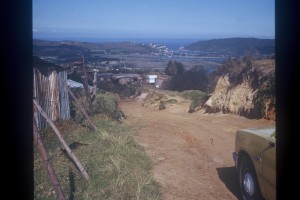 Driving into one of the squatter camps in the Child Welfare ‘bakkie’ (pickup), with the Knysna Lagoon and the ‘white’ town in the distance.

Children playing at one of the creches my mother started with her colleague Paula Whitney.